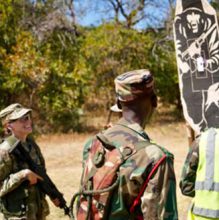 Cadet Maier-Costanza has demonstrated great dedication and determination since she stepped foot on the University of Alabama Campus and joined Army ROTC.

Cadet Maier-Costanza is a very active participant in and outside of the ROTC program. She has played on the UA club soccer team, has volunteered to be the OIC for the Dinning Out in Spring of 2020 and is the current PAO for the Cadet Battalion.

Furthermore, Cadet Maier-Costanza has been a member of the Ranger Challenge team since the Fall of 2018 and goes above just being a team member. Cadet Maier-Costanza has made positive impacts by making it a point to mentor and assist other Cadets on the team. This not only shows her dedication to the team but is a good representation of how she exemplifies the Army values.

While being very active and involved, Cadet Maier-Constanza has still maintained a 3.7 overall GPA and has consistently scored a 300 on the diagnostic and record APFT’s. Cadet Maier-Costanza’s overall performance is outstanding and she has great potential as a future leader.

Since middle school, I have felt a vast sense of pride and respect whenever I saw a person in uniform. I wanted to be a part of what I thought was the most honorable profession a person can participate in.

I put all my resources into applying to West Point and being a Cadet there. When I did not get in, I did not know what I would do because I had not heard of ROTC yet. When I did, I decided to give it a shot for a year and reapply, but I fell in love with UA and the ROTC program instead.

I want to serve in the Army to help give opportunities to those who cannot serve. I want people to be inspired when they see me in uniform, spurring a want to join the military too.

The Army gives me a sense of purpose in an otherwise chaotic life.

72
Cadet of the Week 6th brigadeArmyArmy ROTC CadetUniversity of Alabama