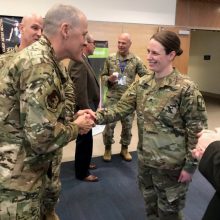 What Makes This Cadet  Stand Out From Their Peers?

Cadet Laura Lamecker is an MSIII at the University of Alaska Fairbanks. Laura joined the Nanook Battalion at the start of the Fall 2019 Semester as an ADO Cadet. In less than one semester, Laura immediately stood out from her peers as the most capable leader in her class. She is a competent, mature, and adaptable leader who is quick to learn and eager to selflessly serve others.

In a very short period, Cadet Lamecker’s contributions and dedication to the program truly set the example for others to follow. In one semester alone, Cadet Lamecker volunteered for numerous events and has proven herself a leader in the Nanook Battalion. As a brand new Cadet to the program, Cadet Lamecker offered to serve as a Team OIC in the annual UAF Hockey Team Challenge. This event is hosted by the Nanook Battalion every September by partnering with the UAF Hockey Team for a preseason team building event. Cadet Lamecker led one of seven teams through several physically and mentally demanding events.

Furthermore, Cadet Lamecker immediately volunteered to compete for a position on the UAF Ranger Challenge Team. She dedicated five days a week to a tough physical training program and additional technical training prior to weekly Leadership Labs. Cadet Lamecker’s efforts earned a place on the team and she helped lead the team at Camp Rilea, Oregon, during the 8th Brigade Task Force West Ranger Challenge Competition.

Cadet Lamecker has extended her leadership and influence beyond ROTC by contributing significantly to the University of Alaska Fairbanks campus in addition to an intense academic curriculum. As a former Army Musician with the 9th Army Band at Joint Base Elmendorf-Richardson, Cadet Lamecker continues to engage with the music community on campus participating as a member of the UAF Wind Symphony and a substitute player for the Fairbanks Symphony Orchestra. She also recently supported the Arctic Symposium 2019 opening ceremony on 13 November 2019. This event was in support of United States Northern Command (USNORTHCOM) and hosted by Alaskan Command (ALCOM) at UAF. Cadet Lamecker sang the National Anthem and Alaska State Flag Song acappella and was recognized for her outstanding performance by ALCOM Commander, Lieutenant General Thomas Bussiere (USAF) and UAF Chancellor Daniel White.

Cadet Lamecker is the epitome of a team builder, and her ability to influence and integrate into any team is impressive. Cadet Lamecker has the right mix of experience, attitude and intelligence to perform in any capacity. Her diverse background, education and commitment to the team makes her the ideal leader to highlight!

In The Cadet’s Words

Graduating from college with a Bachelor of Music, I saw serving as an Army Musician as an opportunity to work for a few years in a band, grow as a musician, pay off my student loans, and put myself in a better position to determine my future career.

However, early in my first enlistment I realized that serving in the Army is so much more than just a job – it is a team where I feel motivated to contribute, grow, and lead. As an NCO, I have spent years training and leading Soldiers. Nothing makes me more proud than to watch my Soldiers succeed.

I am excited for the opportunity as a Commissioned Officer to expand my sphere of influence to build stronger teams, lead more Soldiers to succeed, and have a greater impact on the Army.

I am pursuing a Master’s of Science degree in Biochemistry with a goal of conducting medical research both in and out of the Army. In addition to my Military service, I feel that I can have another meaningful impact as a researcher, contributing to the advancement of science and medicine.