“It seemed like every scary movie where someone’s about to fall off a cliff,” said Army Reserve Officer Training Corps Cadet Jasmine Valentine, from 2nd Regiment, Advanced Camp, when describing the feeling of being on the 64 ft. rappel tower at Fort Knox, Ky.

Valentine is from the the University of North Georgia where she has done things similar to the rappel tower with its ROTC program, but those experiences did not take away the fear she had going into the rappel tower training event.

“I have a deathly fear of heights,” she said.

Valentine said encouraging words she received from her squad and Cadre helped calm her nerves. Though the Cadets knew long before that they would be going down the rappel tower, they were not told when until the briefing the night before they went down.

Valentine said since she told her squad about her fear of heights, as soon as they got the brief, she was being asked if she needed help. Her squad members were encouraging her, saying “you got this,” and even offering to go down with her.

Once the day came and Valentine was walking up the stairs, she said she felt like she had tunnel vision; her senses seemed to fade but her hearing was heightened.

“I heard someone say, ‘there’s only one way down, you’re not taking the stairs,’” Valentine said.

After completing the small 45 degree angle practice wall and having her equipment checked, the future Army leader was confronted with a climb to the top of the menacing rappel tower.

“I did a little pause on the staircase, looked over and I was like ‘oh my gosh, this is really high.’” Valentine said.

After making it to the top of the tower, the petite Cadet was reluctantly ready to rappel. At the edge of the tower, 2nd Lt. Lauryn Jeans, the executive officer of the confidence course, guided her through the process.

Since Jeans was one of the demonstrators, Valentine said she felt safer because, “that obviously means that she knows what she’s doing.”

Jeans, was calm and reassured her. She gave her a fist bump and told her to smile for the camera before going down.

Valentine said it made her laugh, which ultimately helped tame her nerves while standing on the side of the wall. Once she began to step down and attempted to do bounds she heard, “hey you’re halfway there” which made her feel more relaxed.

“I was kind of like wait, really? And loosened up until I got to the end,” she said.

After Cadets completed the wall side of the tower they went through the equipment checking process again to make sure it was still nice and tight, and made adjustments when needed.

Afterwards, they walked back up the stairs to go off one of the two open sides of the tower.

The objective on the wall side was for the Cadets to place their feet on the wall between bounding movements while maintaining control. The open side offered a chance to practice rappelling in an open space.

Valentine said she surprisingly found the open side to be easier for her.

In addition to the multitude of supportive peers cheering her on, she said what helped her off the edge was the thought, “I’m afraid of heights but the only way I can get over this is if I just trust the rope,” she said. 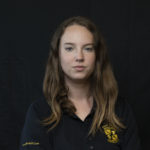 Savannah Baird is from Scottsburg, Indiana and is a rising senior at Ball State University. Here she studies photojournalism and participates in leadership roles for the National Press Photographers Association (NPPA) student chapter as. Secretary and Byte, Ball State’s online entertainment publication, as the 2022-2023 managing editor. Baird learned to hone in on her photography skills more as a photographer for Byte and hopes to polish this further and learn video skills during her time as a public affairs intern for the Army ROTC Cadet Summer Training program at Fort Knox. She hopes to use this experience to build a career as a future military photojournalist.

Cadets crawl before they run