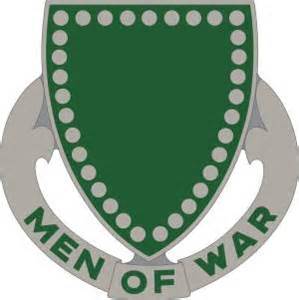 The 33rd proved its courage and bravery, and lived up to its nickname and motto, “Men of War” during World War II as it fought valiantly in Normandy, northern France, Rhineland, Ardennes-Alsace and central Europe campaigns.

It distinguished itself during two savage attacks on the city of Mons, Belgium from Aug. 31 to Sept. 3, 1944. The battle resulted in the capture of Mons from the German 7th Army. Following the liberation of Mons and the mauling of elements of the German 7th Army, the Men of War moved back to reinforce the Siegfried Line on the western border of Germany.

For its gallant and decisive action in the battle and capture of Mons, the 33rd Armored was awarded the French Croix de Guerre with silver gilt star by the provisional government of France.

The bravery and dedication of the 33rd was additionally recognized with a Presidential unit citation with streamer embroidered “hastenrathscherpensel,” and citations in the orders of the day of the Belgian army for participation in the Ardennes and Belgian campaigns.