FORT KNOX, Ky. – Cadet Timothy Burnham, First Regiment, Advance Camp, approaches his casualty which was shaded in the wood line. Warm from the morning heat, he begins his graded exercise. Dropping to his belly ‘firing’ his weapon to clear the area for his wounded battle buddy, a large plastic dummy weighing in at around 105 lbs., plastered in artificial wounds of red tape.

He calls out, “Are you alright? Can you provide self-aid and can you get to cover?” 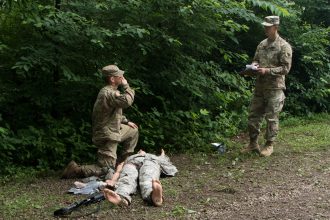 Burnham, from The Ohio University, begins providing the lifesaving first aid he perfected earlier, Tactical Combat Casualty Care (TC3) under the supervision of a grader.

“We are going to apply pressure to prevent anymore blood loss,” Burnham announced.

He passed the test on his first try, now dripping with sweat he smiles while walking away from the testing site.

Burnham was one of many Cadets to participate in and pass their TC3 training, June 12.

Tactical Combat Casualty Care is a standard of care provided before a medical professional arrives or before a casualty is transferred to a medical facility. 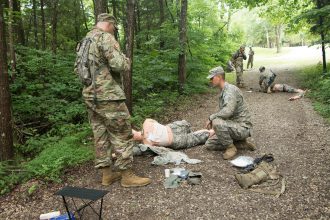 According to Staff Sgt. Thomas Mendoza, from Warrensburg Missouri, nearly 90 percent of

casualties are saved because of the TC3 life saving techniques, which is why Cadets are developing their understanding of these skills.

“I have seen many people who have taken contact with the enemy and have come up on top,” he said. “Because of measures their battle buddies, their medics, their leadership, just their left and right have done for them.”

The skills tested and learned at the training site are important, but simple, according to Mendoza. He does warn that some things will require effort though.

“The biggest challenge is learning the verbiage and body mechanics, like nasal pharyngeal 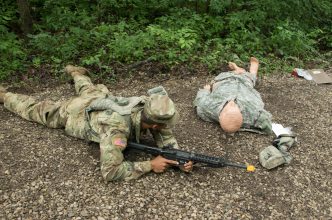 airway.” he explained. “You need to understand the reason behind the training and why we do this.”

A Cadet from the University of Wyoming, Jamie Britenstine, recommended Cadets purchase a Army Field manual and to remember the acronym ‘MARCHE‘, Massive Hemorrhage, Airway, Respirations, Circulation, Head and E, for everything else.

Burnham also provided insights after his training, relating the first aid skills to driving a car.

“It’s just like driving a car, you just do it without thinking,” he said. “You don’t think about 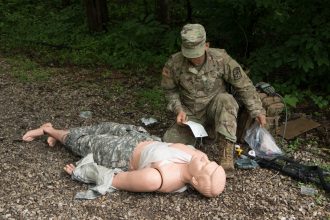 turning on your turn signal if you are making a turn on the road, you just do it. That is how it should be with this, because it is important like that.”

TC3 isn’t something they will never see again,” he said. “Most of them once they are with a unit will be thrown into a more in-depth class.”

Both Basic-and-Advance Camp regiments will continue this training. Advance Camp groups will continue in a single station style where they learn all skills at a single place. While Basic Camp Cadets will practice each skill as a unit and then move on to another skill.

Recon for the Recondo