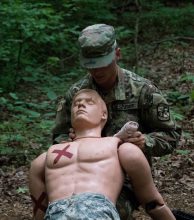 FORT KNOX, Ky.—Randy is having the worst day of his life. With sucking chest wounds and femoral artery hemorrhages, Randy’s skin has already gone rubbery and lost all color. Luckily for him, his battle buddies—every Cadet in 4th Regiment, Advanced Camp—dragged him to safety and treated his wounds.

At one testing station, “we are going to be treating a massive hemorrhaging wound to the leg, so we’ll use a tourniquet for that,” Cadet Addison Pratt from Norwich University described. “We’ll treat his sucking chest wound, then a minor laceration on the arm.” 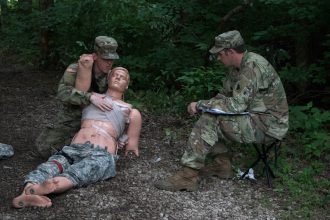 “It’s basically first aid for when you get to a casualty on the field,” Cadet Matthew Montanaro from Slippery Rock University explained.

In the field, everyone must be a first responder. After this training, each of these Cadets will be able to stabilize an injured battle buddy and give them that much more of a chance to make it.

“Everyone’s a rifleman first, so, in an ideal world, a platoon leader would never have to do this,” Montanaro concluded. “But, it’s not an ideal world; everyone needs this skillset.”

Our Soldiers are asked to hold and protect each other’s lives. Today, they became better at it. 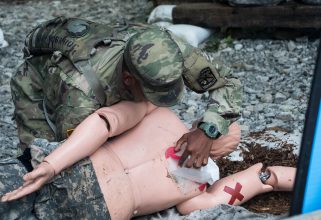 “When we go downrange, we only have each other,” Cadet Krysten Vasquez from Texas A&M University said. “We look to our left and right, and that’s all we have—our brothers and sisters.”