FORT KNOX, Ky – After nearly a month apart from their loved ones, 2nd Regiment, Advanced Camp Cadets greeted their families and friends with smiles, hugs, and kisses on Family Day, July 9, 2018. 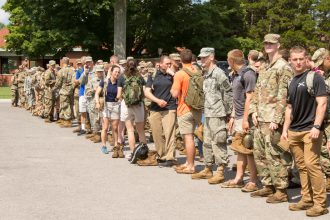 While parents and siblings finished viewing a presentation in Waybur Theater, cadets lined up in formation outside the door. The joy was radiating off the cadets, as chatter of plans and excitement filled the air.

With only 8 or 9 hours before they must return, Cadets try to make the most of their time outside the gate.

“I think we might be headed to see Lincoln’s birthplace, about an hour from here,” said Cadet Ryan Carragher, Boston College, whose father traveled hours from New York, New York for the event. 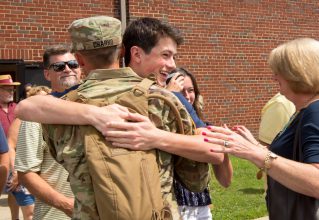 For many Cadets, food was their first priority. The value of a good meal is something that they seem to cherish, as well as their family.

“I’m going to eat a bunch of food, “ asserted Cadet Jacob Chapman, when asked about his plans for the evening.

Mentions of different foods were thrown about: wings, mexican, sushi ー just to name a few.

For others, spending time with their family is what really matters. 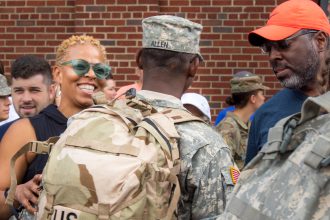 “You miss them when your away, but you know it comes to an end eventually and that you’ll see them soon,” explained Cadet Liam Grimmer, Pennsylvania State University.

Once the doors to the theater opened and families were reunited with their Cadets, they headed off to fulfill all their plans for the evening and make up for lost time.