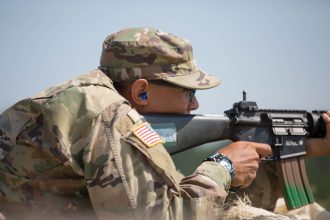 The Cadets arrived at the shooting range with a clear mission, qualify. Qualifying means the Cadets have received a go and proven themselves to be a skilled marksperson. Having a chance to work with rifles and experience the process of qualifying gives Cadets a chance to work on a skill they will be required to pass during Advanced Camp.

Before qualifying the Cadets must successfully participate in a group and zero. This is the process of achieving precision, grouping at least three shots in a close space.

Cadet Lucielle Holliday, Xavier University, hadn’t used an M16, a heavier rifle than the other weapons she had experience with before and like many others failed to group on her first try. However, she didn’t give up and successfully zeroed after assessing herself. 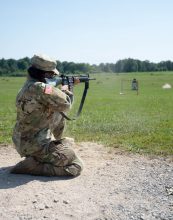 “I was close,” she said. “It was mostly my trigger squeeze and making sure I was in a comfortable position when you are in the prone position shooting.”

After successfully zeroing their weapon they move on to their final task, qualifying. Cadets take time shooting in a variety of different positions and aim at different silhouettes on their target.

Cadets come from a variety of programs each with different resources. Many Cadets especially Basic Camp Cadets haven’t shot a rifle or at least not a military grade rifle. Sgt. Anthony Jarecki, Fort Hood, Texas, recommends Cadets not worry or let their nervousness consume them. 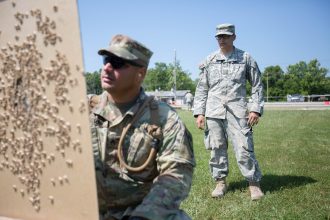 “Statistically, people that haven’t shot before do better than those who have,” He said, “reason being they don’t have any bad habits. If you have bad habits, you have to untrain and then start over from scratch.”

“Confidence is definitely key,” he said. “Use the people around you, your Cadre, [non-commissioned officers] will help you. Don’t be afraid to ask questions if you don’t know what you need to do.”