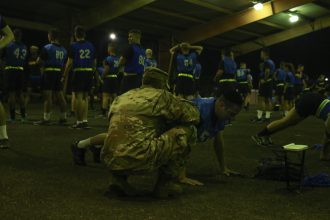 FORT KNOX, Ky. – While the rest of the world slept, Cadets from 8th Regiment, Advanced Camp pushed through the Army Physical Fitness Test (APFT) early this morning. At 5:00 a.m. sharp, Cadre members started their timers and began counting off as Cadet after Cadet completed their two minutes’ worth of sit ups and push ups before heading to the dreaded two-mile run.

Tension and heavy breathing filled the pavilion as Cadets prepared themselves for the next task to come. As the drill sergeant yelled out a five-minute warning, Cadets filed into formation, prepping their watches and steadying their breathing. 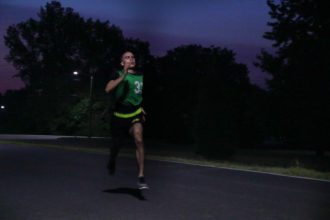 To start the run, the regiment was split into two teams: green and blue. The leading runner of the green team, Alexander McDonald, from Florida State University, said that getting through the two-mile run, “Is a matter of telling your body to work through the nerves and just run free and tell yourself why you’re doing it.”

Blue team leader, Cadet Alexander Bukovich, from Christopher Newport University, gave his advice for success, stating, “The key to running is just simply running, and a lot of people don’t realize that.”

Bukovich emphasized how pertinent consistent training is to success and that the hardest part is getting started. “It’s really about realizing that it’s going to suck at first, but then after a while, going out for runs is a matter of just doing it and then it’s not as hard as it used to be.”

The APFT is designed to test the muscular strength, endurance, and overall mental and physical fitness of soldiers in the Army. Second Lieutenant, Brian Feifar, said that, “as an officer in the United States Army, you have to have good physical fitness in order to have the mental ability in tough physical situations. You have to perform under stress, so the purpose of the APFT is to find out their own physical ability.” 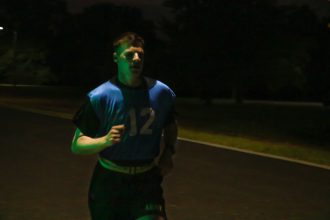 Feifar backed up Cadet Bukovich, agreeing that training, “starts a lot earlier than a week out. You have to prepare consistently and constantly. You have to have a proper mindset as well – it’s not just your ability to perform – and work hard throughout your task and throughout your
training.”

Every Cadet is here for a purpose: to become an officer in the United States Army. The APFT is just one step in their training towards their goal – but the ultimate key to success throughout their whole training, especially the running, is to realize it is going to suck at first, but the more you do it, the easier it’s going to be.

Run for something bigger. Run to be better. Run to lead.

I’m Right Behind You, Battle Buddy