The Cadets mission was to protect their patrol base. For an added challenge, Cadets would have to hold their perimeter for hours while it rained over them. The Cadets had multiple methods of limiting how wet they would be getting. Some Cadets wore their rain gear, while some decided to manipulate the rain gear to make tents or simply used them as blankets. 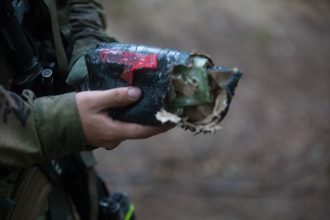 Before dawn broke on the wet morning, a small figure, perhaps more than one, crept past the security and into the heart of the camp. Silently rummaging through rucks searching for supplies, the tiny figure located a ‘mortar’, MRE trash covered in tape. Quickly dismantling the device-leaving it unfit for action-the intruder realized it wasn’t food. The small bandit scurried from base, back into the wood line.

When Cadets discovered their now destroyed mortar, they knew immediately it was the work of the raccoons that frequently, and endlessly, hazed those on security and attempted to steal the light brown, sealed MREs.

The local vandals weren’t the only or biggest issue the Cadets would manage that day. Two Cadets left the secured area to use the latrine and were captured. 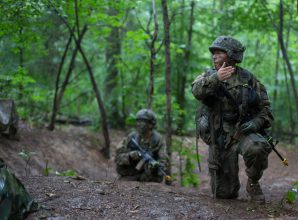 While Platoon leader Cadet Manuel Enriquez, Northern Arizona University, decided to prioritize the original mission, he did begin to plan how to get his Cadets back.

Hours would pass. Hours of staying alert as Cadets fight to stay awake while still laying in the soggy earth. The conflict would come, just as promised.

Calling signs and the sound of twigs snapping rose out of the wood line. Followed by a headcount from the security line. “I see motion, one, two, three,” Cadets continued to add to the total count.

A thunderous roar from the enemy machine gun belted, followed by the clearly visible sparks. The battle had begun. The battle raged – communication and gun fire the only noises. The opposition continued to creep forward, the wide space providing little coverage for the opposing forces. 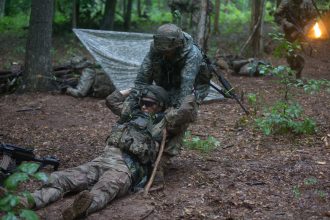 A Cadets drags a simulated injured Cadet across the battle field during the Field Training Exercise at Fort Knox July 16, 2018. Photo by Dustin Massengill.

The first friendly casualty was pulled off the line while the guns still heated the perimeter of the patrol base. But the firing did stop. After 15 minutes of ear-busting conflict the patrol base returned to whispers, accented by the still continuous rain.

The Platoon Sergeant began tending to the ‘injured’ as the individual squads began making any necessary changes to the security line.

After a quick brief, the squads made their requests for ammunition and the now adrenaline-fueled Cadets began preparing for another round of conflict. 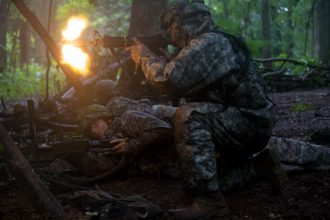 The first enemy element they had encountered was far too small, compared to their reports. The platoon had prepared to clash with a similarly sized unit and had only met half, at most.

Large, black figures bolted across the open field again. The headcount began again as Cadets prepared to receive their orders. “10, 11, 12,” screamed the left side of security. The order came down and the forest instantly began to echo like it was filled with demented wind chimes of war.

After taking out multiple enemy soldiers and suffering 6 simulated friendly ‘casualties’, the situational training came to an end. The friendly prisoners of war returned with the familiar ‘end-ex, end-ex, end-ex’.

With the exercise over, Enriquez realized the importance of staying calm.

“Try and keep a cool head.” He said, “even when you have all these variables moving around you. If you start to get flustered about the variables and the things you can’t foresee then you aren’t going to be able to see the problems right in front of you.”

Cadets participate in the last CBRN training of the summer