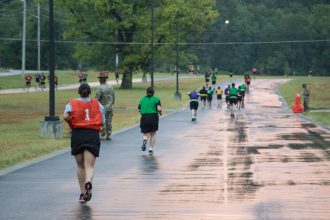 The Cadets must try to complete as many push-ups and sit-ups in the allotted time and run two miles as fast as they can.

Cadet Jhordyn McWhorter, a student at Marion Military Institute, said they have undergone corrective training at Basic Camp to correct and improve form, as well as to enhance endurance, in preparation for the APFT.

She described corrective training as good for team building, adding that the relationships and family dynamics have been her favorite part of camp. 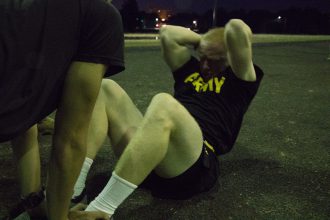 McWhorter hopes to one day max her PT test.

Cadet Farah Teaklah, a student at the Institute of World Politics, mentioned they rucked five miles the day before and she only got four hours of sleep prior to taking the APFT.

“But still,” she said, “you do your best,” adding she was inspired to join Army ROTC when she saw her brother graduate from Army Basic Training in 2003.

Teaklah stated she’s glad to have the experience of being at camp with Cadets who are on the same mission as she.

Cadet Joseph Bigott, a student at McDaniel College, expressed he did better than he expected on today’s APFT. 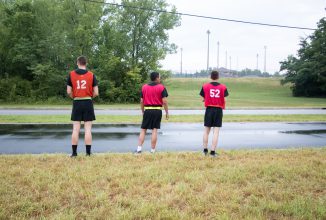 Prompted by Cadet Joseph Bigott (right), McDaniel College, Cadets from 6th Regiment, Basic Camp stood on the sidelines and cheered on their teammates during the Army Physical Fitness Test on July 16, 2018, at Fort Knox, Ky. (Photo by Emilia Kuentz)

“All the training here has kind of acclimated me to the environment,” said Bigott.

After he’d finished the run but others were still going, Bigott grabbed two of his buddies to cheer on Cadets as they entered the final stretch.

As a marathon runner, noted Bigott, he finds being cheered on helps him give a run his all.

“I know how encouraging it is to have people for the last little bit to cheer you on,” stated Bigott. “It gives you the motivation you need to not stop.”

Ruck and Guide On