These Cadets where about to participate in the the final edition of the Chemical, Biological, Radiological and Nuclear (CBRN) training. Lt. Col. Derek Carlson, Morehead State University, said the humidity would provide a more difficult and challenging experience for these Cadets.

“It’s a big impact,” he said. “The weather has a big impact on all the training, but here, CS, when you have a high humidity day, the pores in the body open up a little bit and it does effect you a little more.”

The entire training consist of four units: uniform, chamber, detection and vehicles. This day gives cadets confidence and understanding in their gear, and shows them all the tools, they and their soldiers will have at their disposal. 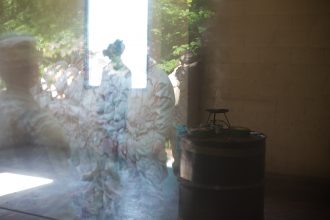 Cadets are reflected in the window of the chamber during the CBRN training at Fort Knox July 22, 2018. Photo by Dustin Massengill.

Cadet Isabel Rosero, Fayetteville State University,  said she was nervous but the training fully prepared her for the chamber.

“It definitely prepared us to go in,” she said. “I was confident in the equipment.”

Cadet Mark Handley, University of North Georgia, said the training is all about learning to maintain themselves in all conditions.

“You want confidence in yourself and your gear,” he said. “To make sure you can contain yourself through pain and discomfort, to a very extreme extent.”

Carlson told the Cadets that the training is tailored on a real world threat.

“I’m an intel officer. For me, this training has to be based on some kind of real threat. The threat that is out there is a pretty significant threat. Just in open source news, North Korea used VX in an assassination over in Malaysia; Russia used a different substance in the UK, affecting 4 individuals and one of those died; Syria bombed their own people with chlorine gas; and then you have the ISIS, the ISIS has used a variety of substances throughout both Syria as well as Iraq.”

To learn more about branching CBRN you can visit Go Army.

A Day of Celebration, A Lifetime of Lessons