After 19 days in the wet, humid wilds of Kentucky these future lieutenants were rewarded with a cool-overcast day for their Graduation Ceremony.

Col. John Cyrulik, Advanced Camp Tactics, was the guest speaker during the ceremony. Cyrulik thanked the Cadets for their choice to join the ‘profession of arms.’

“I am humbled to be serving alongside such an outstanding group of young leaders, as you, during these exceptionally challenging times,” he said. 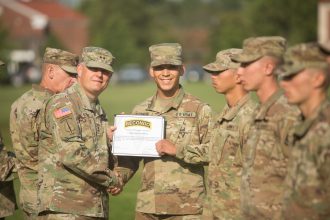 Cyrulik highlighted what is so important about the young Cadets and what they bring to the military.

“82-years separated the battles of Yorktown and Gettysburg.” he said. “The time for Gettysburg and D-day in Europe, 81-years. Next year commemorates the 75-year anniversary of the D-day landings. If history is a guide then in all probability we will face an existential threat to our great nation by the mid 21st century”

“We need your enthusiasm, new ideas, physical and mental toughness, and most importantly your values and character in our Army without delay,” he emphasized.

Cadet Luis Alcantar, Northern Arizona University, who received the RECONDO certificate for reaching above the Army standards and receiving a first time go on all must-pass events, reflected on his experience at Advanced Camp. 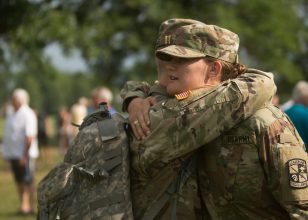 “It challenged you physically, mentally but I think if you went into it with the right attitude it was an event to remember. I definitely enjoyed it,” he said.

Cadet Natalie Taylor, Texas A&M University, received the Bold Leadership award for motivational and leadership excellence. Taylor said the experience both of being a leader and a follower was amazing.

In all, the Cadets felt that the ceremony was a great send off from camp.

“We have finished the last big culmination event before we commission as officers,” Taylor said, “and this is the last thing before we step out into the real world, so it was real neat to have a last send off before we start our real careers.”