FORT KNOX, Ky. – Alpha and Bravo Company Cadets from the 2nd Regiment completed their Army Physical Fitness Test (APFT) before sunrise this morning.  Passing their APFT is just one of several must-pass events for all Cadets at Advanced Camp.

“It’s a huge event. It counts a lot to your overall score in the platoon. So, you definitely want to make sure you’re physically fit before you come to camp,” said Cadet Trevor Stinson, an ROTC student at Boston University. 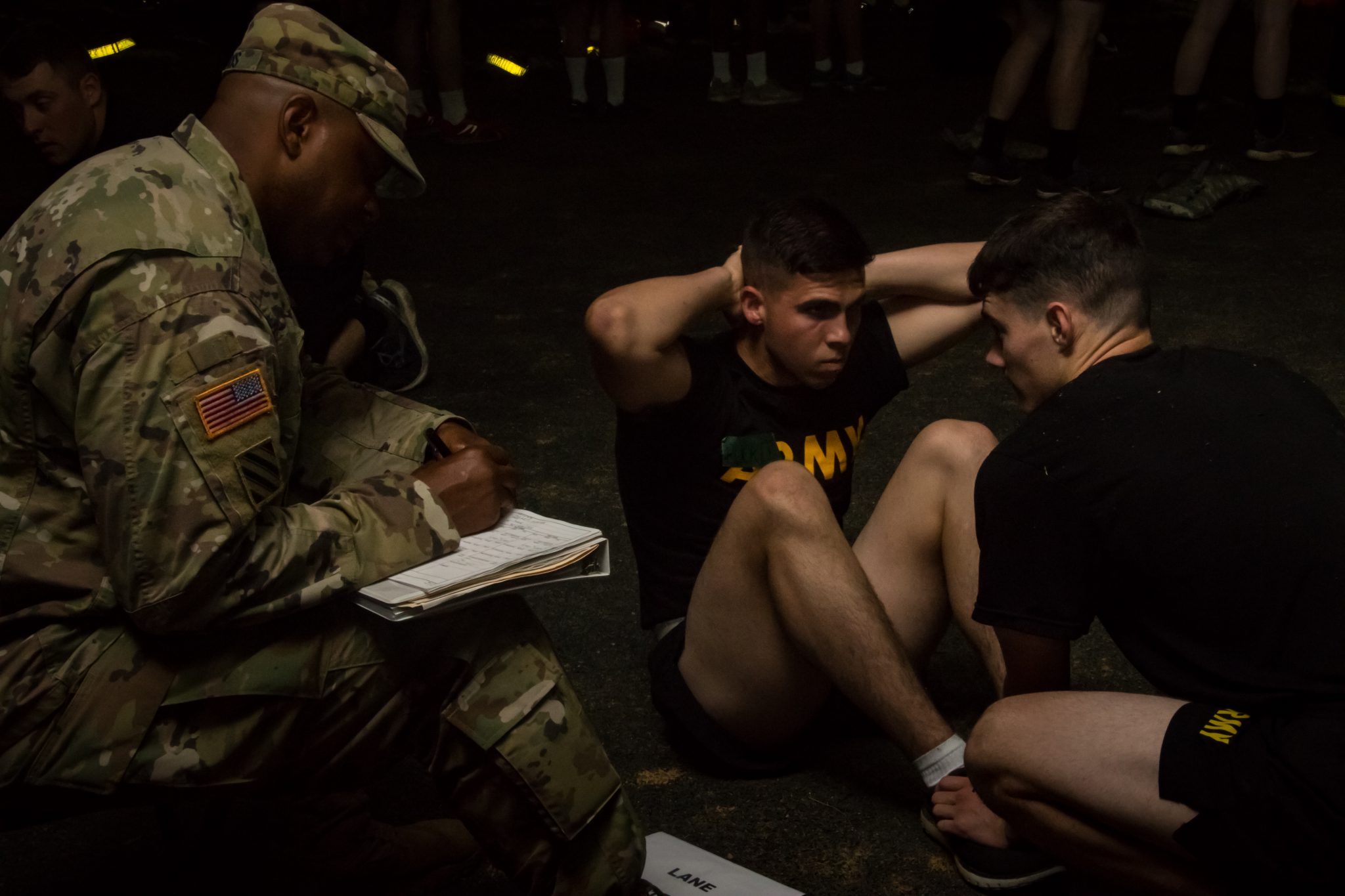 Cadet Hunter Puckett from The Citadel (left) and Cadet Jackson Shriver from the New Mexico Military Institute (right) during the sit up portion of the Army physical fitness test (APFT) at Fort Knox, May 31, 2019. | Photo by Jodi Moffett, CST Public Affairs Office

Preparing for the APFT sometimes called for multiple workouts in a day, and many Cadets, such as Angela Liu, took their training seriously.  “PT every morning and then every night before bed, cranking out some pushups and sit-ups, cranking out as much as I can,” said Liu who attends Norwich University.

Ashley Clemons from Fort Valley State University also had an extensive workout routine before arriving at Advanced Camp.  “Before I got here, it was PT every day, sometimes twice a day.  Running with my Cadre from school, workouts with Cadre, and just eating healthy is key,” said the Valdosta, GA native. 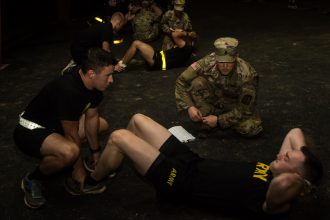 When asked what helped the Cadets push through the pain, Liam McCabe, a Cadet from Villanova University, said, “Personally, I’m very hard on myself. If I fail, it’s going to be a lot worse than me pushing myself and hating my life for a few minutes.”

Cadet Mary Treuting, George Mason University gave some insight as to how she continues to motivate herself throughout training at Advanced Camp saying, “You can always do more than what you think you actually can.  You get to 40 (sit-ups) and then say alright it’s just one more. That’s my mindset.”

“It’s thirty-seven days, right? We’re spending a lot more time in the Army than thirty-seven days,” explained Cadet Dustin Axarlis from the University of Dubuque.  Axarlis, who maxed the sit-ups and the two-mile run, but missed qualifying for RECONDO by four pushups, said, “So if we can’t do this thirty-seven days now, how are we going to continue on through our entire careers? It’s just one more day…just keep working through one day at a time.” 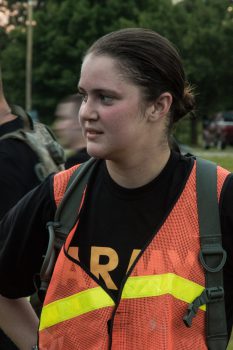 Many Cadets were able to max out their sit-ups and pushups; however, some struggled to meet the two-mile time requirement.  Even though APFT is an individual test, it did not stop Cadets from encouraging and motivating others in their company.

After finishing their two miles, a group of Cadets noticed a fellow ROTC student struggling to complete her own.  The eight Cadets ran with her, encouraging her the last twenty-five meters to the finish line.  When asked why they felt compelled to do this, many agreed that they would want someone to do the same if they were in her position.  These Cadets wanted to help their fellow Cadet overcome the mental barrier she might have put up during the two miles.

With the help and encouragement of each other, Cadets from the Alpha and Bravo Companies were able to complete their Advanced Camp APFT requirements before two hours had passed.