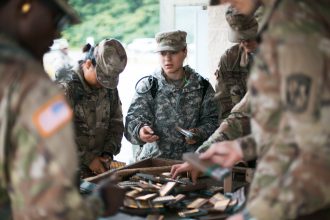 To successfully qualify a Cadets must hit at least 23 of the 40 targets that pop up in their lane. Targets are as close as 100 meters and as far away as 300 meters. They pop up as a single target or in pairs. The shooter fires 20 rounds from the prone supported position and 10 rounds each from prone unsupported and kneeling position.

“Today was the best I ever done on Weapons Qualifications, I qualified with a 31 which is sharpshooter and I owe it all to the infantry guys out here that have been able to teach us for the past few days,” said Cadet John Owens, from Virginia Tech.

Those “infantry guys” Owens credited his success to are active-duty Soldiers from Fort Carson’s 4th Infantry Division and are here supporting Cadet Summer Training. Owens urged the Cadets who still need to attend camp, or qualify with their weapons, to ask the cadre for help.

“If you think you’re a weak shooter, ask as many questions as possible. I’m a weak shooter, I’ve never shot above 25 and after asking all these questions these past three days I’ve shot 31,” said Owens. “Be calm, have fun, relax, and you’re going to be fine.”

Thompson said future cadets should prepare by practicing before they come to camp. 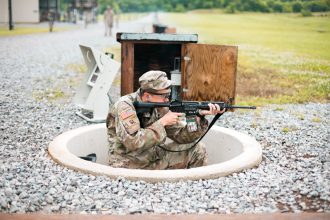 2nd Regiment, Cadet Ryan Kaylor from Texas Christian University looks down his sight and aims at the targets down range from the kneeling position in the foxhole during Weapons Qualification at George Blair Range at Fort Knox, KY. | Photo by Hannah Hedden, CST Public Affairs Office

“A lot of people get here and are already skilled with a rifle, me I wasn’t, so practice shooting before you come, he said. “And when you do get here, just fine tune those skills you already have, that you already posses, and get a good lane.”

Cadet Nikia Free from the ROTC program at Mary Baldwin University used the extra instruction to prepare for her qualification.

“Pay closer attention,” said Free, who had some difficulty when multiple targets popped up during her round. “I have to make sure to scan my lane completely before I stop shooting because I may have missed one.”

For Free the marksmanship training has been her favorite part of advanced camp thus far.

“Back at my school we didn’t get a lot of it [range time] and coming here these past four days I’ve learned a lot more about the rifle, I can shoot a lot better,” she said.

It’s #Snot as Bad as You Thought

The Proper Way to Provide Cover

A First for Many; The Army Combat Fitness Test