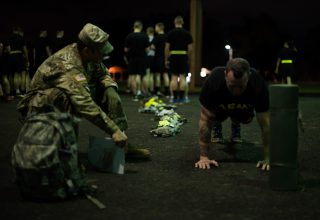 “I respect the work ethic more than the number,” said Maj. Timothy Patterson, a ROTC instructor at Alabama A&M. “It was the true meaning of give your best at everything.”

Cadets rise bright and early take the APFT. Cadre members wake them up this early to get their APFT out of the way and to move onto the next training scheduled.  The APFT is definitely a mind game.

“We all want to do great Advanced Camp. We want to push ourselves to the limit, and the ability to pass and go beyond what you thought you couldn’t do,” said Ashley Matta, University of Mary Hardin-Baylor.

Cadets from 4th Regiment arrived a few days ago for Advanced Camp so they are still getting acclimated to the new environment.

Cadet Jeffrey Stancielwynn who attends Florida A&M said, “my personal challenge was the run, because we haven’t done a lot of physical training since we’ve been here at Fort Knox.” 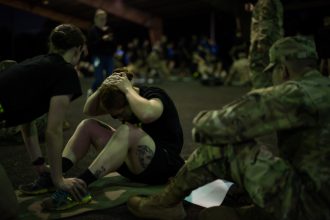 Cadet Mackenzie Morris, from Virginia Tech, had a motivation that was a little deeper than others. “I really wanted to get a good score on my PT test because I wanted to do the best that I can here. That really helped push me through [APFT] especially during the sit-ups, which aren’t my strong suit.” Morris pushed herself further than she thought she could and was able to successfully pass the [APFT] test.

Many of the Cadets from 4thRegiment, Advanced Camp pushed beyond the limits that were expected of them. “To lead in the Army is such a privilege that the least we can do is put an effort in PT,” said Cadet Thomas McGuffey, University of Houston.

Different from a Baseball