FORT KNOX, KY. – “These are just basic Soldier skills that everyone in the Army just needs to know,” said Cadet Joseph Marcos, from Seton Hall University, “Not everyone is going to be in combat but you may find yourself in that position where you may have to execute some of these tasks.”

Cadets started the day by practicing with mock hand grenades then moved on to live hand grenades. After learning how to operate one, 2nd Regtiment Advanced Camp Cadets learned how to use it to their advantage. 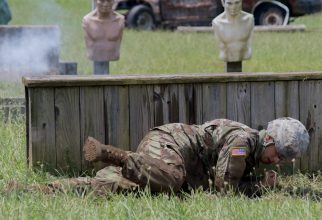 Once Cadets completed these two trainings, they went down to the qualification course to test their ability with a hand grenade while in motion.

During the Hand Grenade Qualification course – a go or no go test for Cadets – there were six different obstacles that Cadets had to maneuver through. Some of these obstacles are a bunker, throwing the grenade into a mortar pit or throwing it into a trench.

While going through this course, Cadets had to throw their hand grenades in three different positions: standing, kneeling and prone.

Each obstacle was based around these three positions that are commonly used by Soldiers while in combat. This qualification helps build accuracy and familiarity to the positions for Cadets. 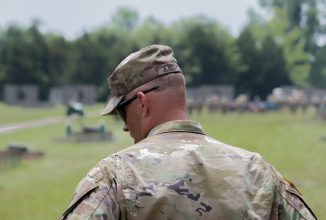 Master Sgt. Jason Knight observes Cadets from the 2nd Regt. Advanced Camp while they police the hand grenade quaification course to look for pieces of the mock grenades they forgot to pick up at Fort Knox, Ky., June 10. | Photo by Matthew Billiot, CST Public Affairs Office

A few key elements to successfully completing this course were for Cadets to listen to the Cadre, maintain a calm manner and throw accurately.

Throwing hand grenades was nothing new for Marcos, but now he feels more comfortable with removing the safeties, aiming correctly and throwing a grenade. He said, “My favorite part was definitely getting dirty, rolling around in the mud, that is always pretty fun.”

“The first time you handle a grenade you are a little nervous, but after you get some repetitions you just feel a lot more comfortable with the equipment,” said Joshua Kelsey, from the University of Central Oklahoma.

Making sure his throws were accurate seemed to be Kelsey’s only struggle with this qualification course. But with more throws, he become more confident in his ability and started to enjoy the course.

“Once [Cadets] reach the qualification course, the biggest thing for them is to just be willing to get muddy and dirty,” said Sgt. Ryan Davis, from Fort Carson, “You are in the Army, so, just embrace it.” 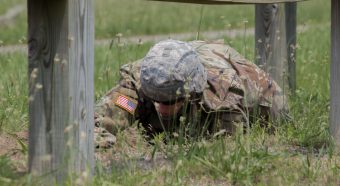 Knowing how to throw a hand grenade is a “basic level, skill level 1 task” according to Davis.

It is important to Davis that Cadets have this ability, “because the way the world is shifting you never know if we are going to be in total war again.” It does not matter what a Cadet’s Military Occupation Specialty (MOS), they could find themselves needing this skill.

Davis said, “As long as you trust your equipment it is not going to hurt you.”

“This definitely builds confidence and gives us practice,” said Matthew Hiyakumoto, from the University of Hawai’i at Mānoa.

“Go all in and just dive into the water. Just get muddy and dirty, get it over with. Get that part out of the way and just have fun,” said Hiyakumoto for future Cadets.