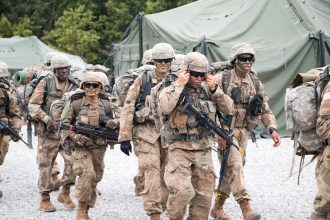 1st Regiment Cadets line up and head out to the buses that will take them out to their field training exercise. The FTX lasts for 14 days during CST at Fort Knox, KY. | Photo by Hannah Hedden, CST Public Affairs Office

FORT KNOX, Ky – The culminating event of CST is the field training exercise (FTX) – which places Cadets in stressful situations that simulate a battlefield environment. But before 1st Regiment Advanced Camp can make their way to the Wolverine Lane, they have to get through their Pre-Combat Inspections (PCI) and Precombat Checks (PCC).

“Today we are developing platoon SOPs and then we’re getting ready to conduct our first FTX which would be on the Wolverine Lane.” Dajuan McDonald, a Cadet from University of South Carolina explained. “Standard Operating Procedures [are] how you conduct operations that’s going to be specific to every platoon or squad.”

As a platoon, the Cadets use the information in their Ranger Handbooks to develop their SOPs. They are allowed to alter any of the information that is given to them in ways they believe will help them be more successful in closing with and destroying the enemy.

With PCI/PCC, Cadets and Cadre ensure that each person and all equipment is accounted 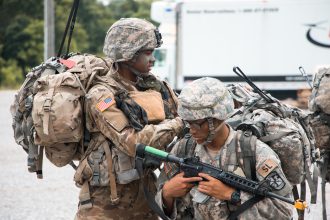 for and in acceptable condition to complete the missions while in the field.

Cadre walk and assist as Cadets develop their SOPs with their Platoons. As the Platoon Leaders (PL) and Platoon Sergeants (PSG) prepare their Cadets for their combative tactical trainings, the Cadre can see what Cadets need to work on to increase how successful they could be in the field.

“[Something the Cadets need to work on is] definitely movement and maneuver. They spend a lot of time in classes sitting down. We try to get them out and move around more to actually walk and run through some of those battle drills, those movements,” said Maj. Andrew Bischoff, an Assistant Professor of Military Science from John Caroll University.

While out in the field, Cadets will be evaluated on how effectively they work with each other and in their leadership positions to complete ambushes and defend their territory against the enemy. With the information Cadre collect while observing the Cadets in action during the FTX, Cadre can pinpoint and discuss areas of improvement for Cadets with them during after actions reviews (AAR) when they leave the field.

As the 1st Regiment finished up their PCI/PCC and load the buses that take them to Wolverine Lane, they began to say cadences and chants to get motivated for the field. 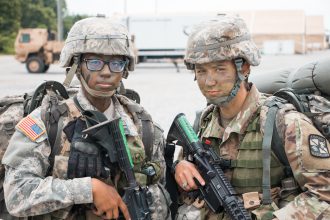 1st Regiment Cadets Thalia Villa (left) from Mary Baldwin University and Makayla Chastain (right) from the University of North Georgia wait for the buses to take them out to the field as they finish up their Pre Combat Inspections (PCI) and Pre Combat Checks (PCC) for FTX preparation on June 10 at Fort Knox, KY. | Photo by Hannah Hedden, CST Public Affairs Office

“We’re about to take off to start the field [training exercise], so we’re pretty much building up the morale right now,” said Thalia Villa, a Mary Baldwin University Cadet. “We were close from the first week, we all love each other, we all know each other’s names, we all know where each other is from, know whose favorite snack is in the MREs and its just a great time.”

Cadet Alexis Hoskins from the ROTC program at University of West Florida said “the fact that we’re always motivated, always picking each other up, we love each other, we’re like a big family [is what will help us be successful in the field].

ACFT and the Power of Group Motivation