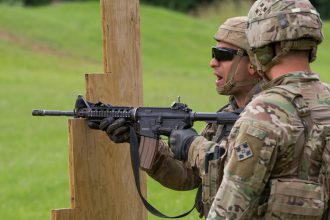 Buddy Team Live Fire tasked each Cadet to trust their battle buddies as they moved down a lane towards a goal. And with it now completed they get a chance to reflect on all their training and time here at CST before they leave the comfort of their barracks and head to the woods for FTX.

Kyle Delaney, an Elon University Cadet, is one of the many Cadets looking forward to FTX and is ready to face the challenge with his platoon at his side.

“Yeah, so, I feel that the testing aspect of CST is pretty much done,” the Annandale, Virginia, native said. “Everyone has either gotten a go or completed the events that they have to, so now it’s just moving on to stuff we have prepared for all year.”

And of all the training aspects he’s gone through, two, really stood out to Kyle.

“I think my favorite part was the grenade throw and this [Buddy Team Live Fire] was actually pretty fun because I got to build some trust with my squad mates,” Delaney said. “And also got to see big grenade explosions, so that was pretty cool.”

Joshua Rebel from Seoul, South Korea, is currently a Squad Leader, one of the jobs that transfers from Cadet to Cadet periodically, and he has no fear for himself or his fellow Cadets moving forward.

“I’m not really nervous,” the University of Texas at San Antonio Cadet said. “I think as a platoon; we mesh really well and we’re going to be able to push through most of the obstacles that are given to us. I think that the only issues may be, like, the weather, the heat or the rain coming down on us. But I think we are ready. I mean I’m ready.” 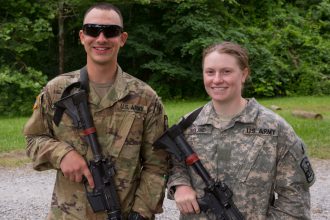 And looking back he found that it wasn’t the training itself that was his favorite part but getting to know those he now calls his friends and squad mates.

“My favorite part has been making friends,” Rebel said. “I know that’s not the training aspect of it, but making friends and bonding with new people that aren’t from my school.”

Cadet Taylor Lacroix, from Charlotte, North Carolina, and Virginia Tech, is also the current CO, or commander in charge of his company. He has just one thing he hopes to do during his time at FTX.

Lacroix wants to branch infantry as soon as he gets his commission, and his favorite days of training reflect that choice.

“Yeah,” Lacroix said. “Either this [Buddy Team Live Fire], grenade range or just any range day. I loved it.”

For others like Cadet Rebecca Lobach, recent graduate of the University of North Carolina at Chapel Hill, they are one step closer to their commission. And the anticipation is energizing for those weary after the weeks of CST.

“I’m pretty excited for it because it’s the last thing we have to check off for getting finished here,” the Durham, North Carolina, native said. “I’m going to be commissioning a lot sooner than everyone else after I finish training, I will have qualified to become a second lieutenant. So, I think I’m a little extra excited to be really close to being done.” 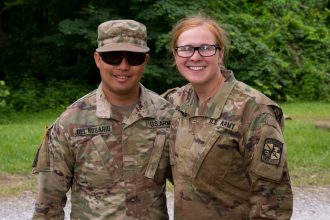 “I honestly think the leadership parts have been some of my favorite parts of our training,” Lobach said. “And it’s really good to get to practice some of the things you have been working on at your school and to work on peer leadership. I think it’s one of the hardest things to do, and if you can motivate your peers to get to where they need to be and when they need to be there then I think you have done something pretty well.”

And then there are Cadets like Zachary Kilgore, who comes to Fort Knox from Belleview, Ohio, who has been enlisted before. In his case, it’s been four years as a 25L, or cable communications systems installer and maintainer, before he made the switch and joined ROTC. And so, for him, the FTX poses no additional anxiety because he’s done this before.

“I’ve done FTXs before,” the University of Toledo Cadet said. “I’m prior enlisted with a signal unit, and I went to basic training at Fort Benning. So, I get the gist of it.”

While he wants to branch cyber security when he finishes college and earns his commission, he also has a love for range work and the inner workings of weapons. 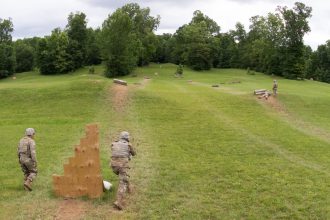 “My favorite part is range day where I get to use my M4 or my M16,” Kilgore said. “I love to be able to get on the range and send some rounds down range, as well as working with weapons and antiques. It’s a hobby I’ve started to pick up with other guys in my unit.”

We would like to wish the best of luck to these Cadets and all the others making their way into the woods and joining those on the other side at graduation.