The purpose of this program is to immerse future U.S. Army officers in the lifestyle of another country, while forming positive relationships with that country’s military.

The selected Cadets who traveled to Thailand went through the entire military deployment process. They got any necessary immunizations, completed preparatory assignments and did research on the country.

Cadet Justin Humphreys, an economics major at the University of Southern Mississippi, said he didn’t know much about the country before he did his research. On top of the various questions and demographic statistics the Cadets had to learn, Humphreys was especially interested in researching the economics and politics of Thailand. 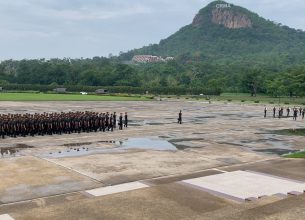 “I learned that it’s an agricultural based economy,” he said. “They rely a lot on trade and exports and imports. I think that’s important because it mirrors their culture and the fact that relationships are important to them.”

Despite this preparation, some Cadets were still nervous to travel to another country. Cadet Tyler Hardy, a Western Kentucky University student, said she expected some competition between her fellow Cadets.

“Whenever you go to a CST event, there’s always a little bit of competition,” she said. “I was like ‘I don’t know what’s going to happen whenever I show up.’ I think that was the only thing I was worried about, just getting along with my team. But other than that, I was open to anything and everything.”

After arriving in Thailand, they spent most of their time learning how the country’s military functions. They did airborne training, completed an obstacle course and learned how Thailand’s Ranger School operates.

They also attended a disaster relief center; the Cadets learned how the Thai military handles floods, earthquakes and other natural disasters.

One of their favorite experiences was visiting an elementary school to learn about the country’s education system. Humphreys said this visit unexpectedly “changed his whole perspective on life itself.”

“Whenever we showed up, I was dreading it,” he said. “I always thought I’m not good with kids. I don’t not like them; I’m just not good with them. We get there and this little 6 or 7-year old girl comes up to me and grabs my finger, and pulls me into the classroom. It melted my heart honestly.” 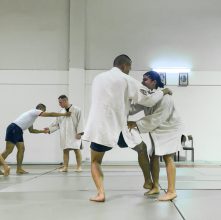 This experience had a profound impact on the Cadets. Cadet Maisy Borden, attending University of Missouri – Columbia, said the trip was very memorable.

“I know that life begins at the end of your comfort zone,” Borden said. Borden, like the other Cadets, did not speak the Thai language, “That’s what I felt like the entire time. My comfort level was always tested whenever I was not able to speak to anyone.”

After CCWP, the Cadets said the experiences would have an impact on their leading abilities in the future. Hardy said this program is very important for military officers, “It teaches you to be flexible, and it teaches you how to interact with different people and to be mindful of their customs and courtesies as well as your own.”

“Just testing your boundaries, like figuring out how you’re going to handle a situation even though you guys don’t speak the same language. Testing your patience, learning how to be more patient and more compassionate,” she said.

Now, these Cadets can implement the skills they’ve learned during CCWP during their time in Advanced Camp.

Open Your Eyes and Breathe

Pick Me. Choose Me. Branch Me.