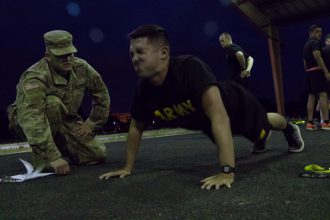 FORT KNOX, Ky – With all due respect to country-superstar Garth Brooks, the thunder rolled and the lightning struck while the 5th Regiment, Advanced Camp put their bodies to the test during the Army Physical Fitness Test today.

The weather did not put a damper on the Cadets spirits.

“Being super hype and getting everyone else hype as well, I was able to exceed that mental barrier and just push as hard as I could beyond the physical capability that I had,” said Michael Vieda, a Cadet from Florida Atlantic University.

Before the APFT, Vieda was a bit nervous with how well he was going to do, especially with the two-mile run ahead of him. But his confidence rose when leading his platoon with cadences, and basking in the energy that the platoon gave off as they marched to the test site.

“I am motivated by others when I workout, I hate working out alone. So it really motivated me when I seen my fellow platoon members,” said Henry Jackson, III, a Bowie State University Cadet. “That’s what motivated me to push harder.” 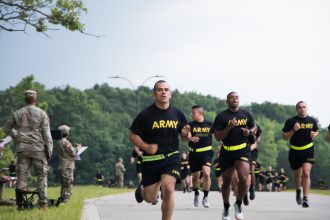 Like a metronome, Jackson came up and down during his two-minutes of sit-ups. As sweat dripped from his forehead and the time slipped by, he began to tire. His battle buddy, who held Jackson’s feet, began shouting encouragement as he wiggled his way up before falling backward. This continued over the final seconds and Jackson finished with 82 sit-ups.

With push-ups and sit-ups complete, 5th Regiment tackled the two-mile run. What was already a dark morning due to the 5 a.m. start became even darker as the rain clouds gathered overhead. The Cadre yelled encouragement as Cadets circled the track, encouraging them to run faster. To finish before the rain started. 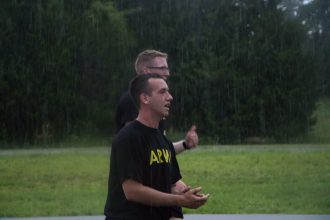 5th Regiment Advanced Camp Cadets cheer on other Cadets in the pouring rain to finish the two-mile run of the APFT at Fort Knox, KY on June 16, 2019. | Photo by Hannah Hedden, CST Public Affairs Office

With their adrenaline pumping Cadets made it to the end of the run. As the rain clouds opened, the Cadets and Cadre quickly made their way to the pavilion.

Zachary Kier, a Cadet from Canisius College, felt that he did very well during today’s APFT, and was excited that he finished the run before the rainstorm began.

“The APFT has been by far the best part of CST because we’ve been sitting for almost five days,” said Jackson. “So it was definitely good to get out here, get moving, and get going, and get our blood pumping.”

Rain or shine these Cadets worked hard to exceed expectations on their push-ups and sit-ups and persevered during their long two-mile run. Most importantly they motivated and believed in themselves and each other with their positive attitudes.

A Little Bit of Chaos