Cadets from the 2nd Regt. Advanced Camp were in their second day of Field Training Exercise (FTX) here at Fort Knox where they learned how to properly ambush an enemy.

“This is entry-level tactic, in the Army you are expected to be able to be deployed in combat at a moment’s notice,” said Cadet Grant Leonard, from the University of Maryland. “Learning something like this is vitally important because it is the foundation of what the Army is built upon.”

Cadets travel through the woods to an Objective Rally Point (ORP) so they can reassess how they will successfully attack the enemy.

Cadets set their rucks down and those keeping watch get in position so that the leadership recon may go and scout the area and make sure no enemies intrude on the ORP.

Leonard’s role was an automatic rifleman, so he stayed at the ORP to help keep watch. 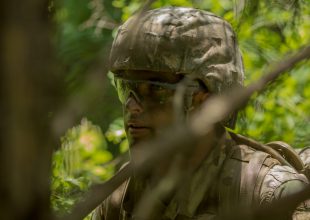 While walking to the Objective Rally Point (ORP), 2nd Regt. Advanced Camp Cadets stop periodically to make sure that they are not too exposed just in case their enemy sees them at Fort Knox, Ky., June 21. | Photo by Matthew Billiot

While going through FTX the last few days, it rained off and on so, Leonard’s advice to future Cadets was, “Simpler is better, bring bungee cords and bring two ponchos.”

“Having this experience gives us an understanding of what other branches are doing, and how we may end up supporting or being in this situation,” said Darrian Brown, from Virginia Tech. 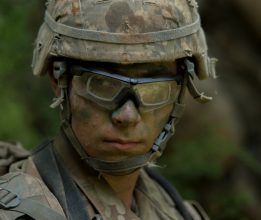 Brown continued, “The infantry tactics we are learning out here sets the overall tone for what the Army wants to do.”

From this FTX, Brown learned the importance of time management. According to Brown, Cadets had three hours to complete this FTX and 30 minutes were for planning.

Something Cadets had to figure out was working with each other. Brown said coming together and bringing the different learning tactics of each Cadet was the most challenging part.

“Do not let your temper get the best of you. Everyone is out here struggling the same, so if you get mad they will possibly get mad too,” said Brown. “Always try to stay positive, and keep going with it.”

We’re All in This Together