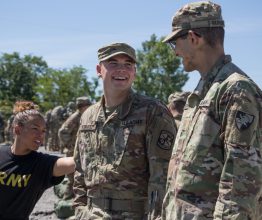 For the first three weeks of Advanced Camp, Reserve Officers’ Training Corps (ROTC) Cadets of 1st Regiment established a trusting relationship with each other. They worked together to accomplish feats such as rappelling down a 64-foot tower and walking through a chamber filled with CS gas during Cadet Summer Training (CST). Then, 40 United States Military Academy (USMA) Cadets were suddenly integrated into several platoons of 1st regiment for the Field Training Exercise (FTX) portion of Advanced Camp.

As part of an initiative to unite the two commissioning sources, USMA at West Point Cadets arrived at Fort Knox, Kentucky to participate in Advanced Camp this summer. For the first time in history, both groups united to complete an FTX together.

Many ROTC Cadets said they came to Advanced Camp with the idea of West Point being a prestigious university with Cadets who are completely immersed in U.S. Army doctrines. The ROTC Cadets have a more typical college experience, with occasional Army training events and classes. Both programs teach the same basic skills with only minor differences.

Several Cadets, both ROTC and West Point, agreed that there can be somewhat of a friendly rivalry between the two programs. Caitlin Withrow, an ROTC Cadet attending Ball State University, said she initially expected the West Point Cadets to “act like they may know more” than the ROTC Cadets. 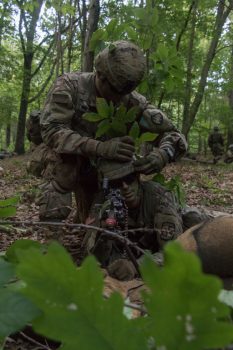 “Before coming to Advanced Camp and meeting West Point Cadets, I definitely thought there is a stigma between them,” Withrow said. “But coming here and meeting a bunch of the Cadets here, the stigma is completely wrong. They’re just like us and we all have some of the same knowledge.”

Upon arriving, some of the West Point Cadets were nervous about joining a platoon that had already been formed for weeks. They arrived just in time to begin the first stage of FTX, the crawl phase.

Cadet Joshua Fonseca, a West Point student, described his experience of initially meeting the ROTC Cadets that he’d spend the next two weeks with. He said the arrival to Fort Knox was hectic, but the ROTC Cadets were welcoming.

“Everyone just came over and started helping us out, introducing themselves,” Fonseca said. “It really was awesome the fact that they were willing to help us immediately and brought us in as part of the family.” 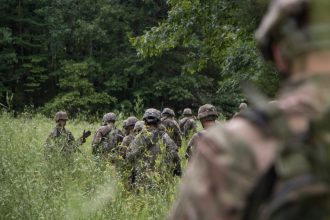 All Cadets worked together in the three stages of FTX to accomplish the required missions. They stayed in the field for days at a time, creating strategies and leading each other to success.

This pilot program of combining ROTC and West Point Cadets for a common training event gave an opportunity for the two groups to work side-by-side before becoming officers. This is important because it gives insight to any similarities or differences between the groups of Cadets and how they operate. 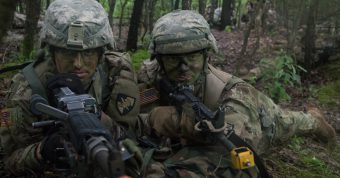 “I’ve always wanted to see how West Point and ROTC could mix,” Kang said. “Especially since normally the first time we get to actually see each other and train with each other is during Basic Officer Leadership Course, which is after we graduate. By being able to train with each other as Cadets while we’re still in college, I think it’s a great opportunity to break that barrier.”

West Point Cadets will continue to integrate into Advanced Camp with ROTC for at least two years. Next summer, there will be 380 West Point Cadets at Fort Knox. In 2021, the goal is to merge about 1000 USMA Cadets with ROTC Cadets. This will ensure a common experience between the two programs.