Spc. Orrin Crenshaw explained the mission for the day. 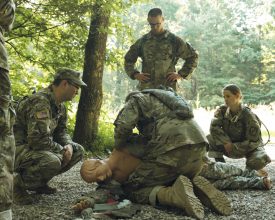 Cadets from 2nd Regiment, Basic Camp watch as another Cadet practices treating a casualty during their First Aid Training at Fort Knox, Ky., July 10. Cadets are taught basic First Aid skills during Basic Camp, and will later be tested on these skills when they return for Advanced Camp. | Photo by Kyle Gallagher, CST Public Affairs Office

Cadet Emmanuel Ajagbe, who attends Florida International University, said First Aid is a critical skill for every Soldier. “It’s important for every Soldier to understand TCCC to be able to apply care to any wounded Soldier in any situation. Whether that is a combat situation or anywhere you might be.”

The Miami Florida native spoke on the challenges of retaining the information. “The biggest difficulty I faced was just cramming all the information up front. But as soon as I started applying it, I started remembering the pieces that we learned.”

Cadet James Wead, who attends Austin Peay State University, and is from Clarksville, Tennessee, described the type of information the Cadets received. “It’s pretty detailed, they do a good job of visually representing how to do it, as well as hands on training individually,” he said. “I pretty much, I came in knowing how to do some of this stuff. But, this was a good solidification and refresher.”

Wead continued, “This is much more hands on, and that’s because this is Basic Camp. My prior knowledge of it was that they just told us how to do it and showed us on a dummy. But here you actually get to use the dummy and use all of the equipment.”

Cadet Ashlyn McConnell attends the University of Houston and is a registered civilian nurse. The Kingsland Georgia native did a compare and contrast of the tactics used in both industries.

“I guess this compared to civilized nursing is different, because this is more combat based and the other is just helping people. And like in general, keeping their health up. Here its more adrenaline based,” she said.

With these new skills the Cadets are continuing to hone themselves into being the future officers of our Army.

It’s Not About Being First