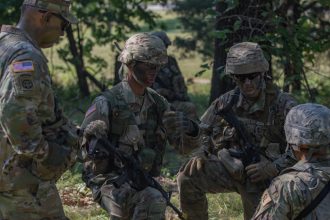 Squad battle drills are the first time Cadets conduct platoon-level tactics together as one unit. It gives them the chance to iron out issues, develop their platoon identity and establish standard operating procedures (SOPs).

Missouri State University Cadet Sierra Goslee, and her platoon, struggled during the training.

“It was rough because it was our first time working all together as a platoon to actually do a platoon attack,” Goslee said.

They have only been together for two weeks, so they are still growing.

“This is just a training and practice to see how well we all perform and what we need to work on,” University of Massachusetts Lowell Cadet James Nigzus said. He added that developing and following SOPs is what they need to work on.

SOPs are a set of guidelines on how certain things should be executed within a unit.

“The importance of SOPs is so everyone has a general knowledge for organization and uniformity, so we all can do our jobs properly and no one gets hurt,” Nigzus said.

Knowing the SOPs helps everyone be on the same page. If someone in leadership is unable to perform their duties, anyone could step up and take their place if they know the SOPs.

“A lot of the times during battle, the platoon sergeant dies and first squad leader dies, and so on, you don’t have any leadership so someone has to set up,” Goslee said.

As they grow as a platoon and create their identity, they are learning how to step up as leaders and work together when needed. They are hoping the FTX will help them reach the goal of successfully becoming a platoon.

“This is the very first step in going in that direction,” Goslee said. “So for the FTX, we have to learn how to work together and take care of our battle buddies next to us, so we can complete the mission.”