FORT KNOX, Ky – During Cadet Summer Training (CST), Cadets from all walks of life take the next step to becoming future Warrior Leaders of the United States Army. These five Non-Commissioned Officers are advancing on their ‘Green to Gold’ path by completing Advanced Camp this summer.

The Green to Gold program is an educational opportunity for Active Duty Soldiers that are interested in obtaining a baccalaureate or graduate degree and commissioning as an Army Officer. There are three different opportunities for Active Duty Soldiers to participate in the Green to Gold program; through scholarship, non-scholarship, and remaining active duty.

Each of these Cadets started camp with different regiments, they were different ranks while enlisted, were on different career paths, and were even in different services — but the Green to Gold program positively impacted their military and educational journey similarly in more ways than one. 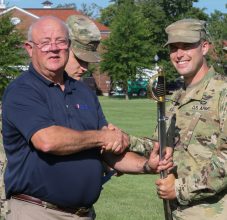 Cadet Sean Schlagel, from the University of Central Florida, the the receives the AUSA Leadership Excellence Award at the 2nd Regiment, Advanced Camp graduation in Fort Knox, Ky., June 29, 2019. This award is presented to the Regiment’s top Cadet, as determined by the Regimental Cadre Board. | Photo by Matthew Billiot, CST Public Affairs Office

Cadet Sean Schlagel is an active duty Cadet in the Green to Gold program at the University of Central Florida. He graduated with 2nd Regiment, Advanced Camp.  Cadet Schlagel has been in the Army for 10 years with a rank of Sgt. 1st Class as a Special Forces Communications Sergeant (18E).

“The Green to Gold active duty program allows guys like me with a little more experience to come in and help the next generation of officers. So, since I wanted to become an officers then, I saw that ROTC was the opportunity to do so,” said Schlagel.

Georgia Southern University Cadet Matthew Loftis served as a Medical Laboratory Specialist (68K) while an active duty Sgt. He was familiar with Fort Knox before attending CST, through the Army Blood Drive Program. He graduated with 2nd Regiment as well. 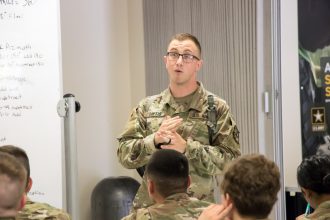 “Absolutely [would recommend the Green to Gold program] especially for those who aren’t combat arms, it’s a good [training experience] because I didn’t know a lot of this stuff,” said Loftis. “And I think it’s just better relationship building because these guys are the future of the Army, we’re going to need them. You get to build a relationship a lot better over the course of two years then you would over a couple of weeks.”

Johnathan Whitworth Sr. is a Cadet that attends Huston-Tillotson University. He graduated Advanced Camp with 4th Regiment. Whitworth served in the Marines and the Army for a total of 15 years before joining the Green to Gold program as a Telecommunications Operations Chief (25W). The program has helped him understand what types of opportunities are out there and ensure that he is getting a quality education.

Cadet Apryl Bowman from Norfolk State University performs a gear layout after her arrival at Fort Knox, Ky., June 12, 2019. On day zero the cadets are inprocessed and checked to make sure they have all the necessary clothing and equipment. They are also assigned to a platoon that they will spend the next thirty-seven days of Cadet Summer Training with. | Photo by Kyle Gallagher, CST Public Affairs Office

Cadet Matthew Mulford from the University of New Haven completed the Land Navigation Course with 3 out of 4 points. | Photo by Hannah Hedden, CST Public Affairs Office

Cadet Bowman is in the Army ROTC program at Norfolk State University, and graduated with 5th Regiment, Advanced Camp. While serving on active duty she was a Staff Sgt. who started as a Cable Systems Maintainer (25L) and re-classed as a Public Affairs Mass Communications Specialist (46S).

“Absolutely [would recommend Green to Gold]! I think the opportunity that we’re given in this Green to Gold program is amazing,” said Cadet Matthew Mulford. “I really recommend that any enlisted soldier who decides that they might want to seek a commission or even go back to school look at this program quite seriously.”

Cadet Mulford attends the University of New Haven, and graduated Advanced Camp with 2nd Regiment. Mulford served as an Infantryman (11B) for four years on active duty. 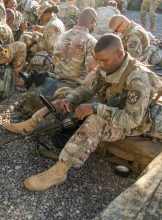 “Being in the military has given me that stability I need and also diversity because it pretty much allows you to grow. If you’re not here to grow, you will stay stagnant, and some people stay the same way. You never go through something, you GROW through something,” said Cadet Whitworth.

Their Army career is not just something these Cadets do, this is a lifestyle for them. They took their enlistment service time they went through as something they chose to grow through. They took advantage of the resources available to enhance their leadership excellence, and these same Green to Gold resources are available to each enlisted soldier that applies.

While the program is highly competitive, it is open to all Army enlisted service members. The Green to Gold scholarship deadline is Aug 16th, so be sure to head to Goarmy.com to learn more information about this scholarship opportunity, as well as the Green to Gold Facebook Page for helpful tips and advice.

Fort Knox Wants You for OPFOR!

Daytime Land Navigation: In One Word