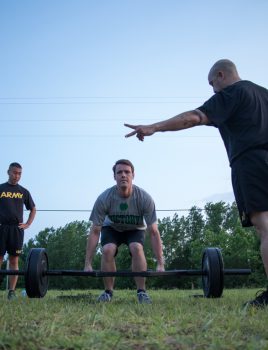 The current APFT consists of three separate parts – push-ups, sit ups and a two-mile run. The new test has six parts. Soldiers must perform a deadlift between 140-340 pounds, throw a 10-pound medicine ball behind their back, do push-ups, execute the sprint/drag/carry, complete leg tucks and run two miles.

The ACFT involves muscles throughout the body unlike the APFT, which mainly focuses on upper-body strength. Maj. Christopher Walker, U.S. Army Cadet Command, said the ACFT provides a better physical fitness test because it requires more effort. The test is also meant to be gender- and age-neutral, so the requirements are the same for both males and females.

“It provides a more well-rounded fitness approach better used in combat situations than the APFT,” he said.

Each exercise is meant to simulate what Soldiers might encounter while deployed. For example, the movement of throwing the 10-pound ball replicates the muscles needed to lift gear or another person over a wall.

Safety is a priority for anyone completing the test since it can be physically exhausting. Walker had advice for anyone trying the ACFT for the first time. 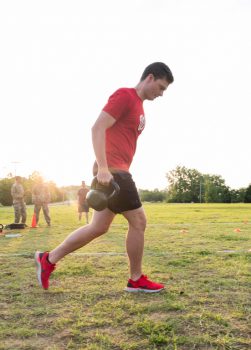 “Take it slow the first time,” he said. “It’s all about making sure you have the technique and the form down. Don’t try to deadlift 340 pounds and then you can’t run two miles at the end. Just pace yourself and then as you do it a few times, you can increase the weights and speed.”

Today, staff delegates were able to see first-hand how difficult the new test is. They actually completed the ACFT themselves.

The staff delegates are visiting Fort Knox and Cadet Summer Training for the next few days. Moore said she’s having a great experience with the Army demonstrations.

“I think a lot of us work with military issues, but some of us have not been to military installations before,” Moore said. “It’s been cool just kind of seeing how things work. Everyone’s been so nice and really open about sharing what the Army’s doing.”

The staff members will do several other Army training exercises this week.

TOC: Prepared for Any and All Situations

It’s A Great Day To Save Lives